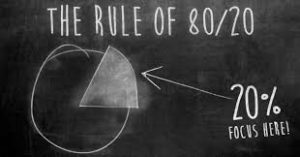 What is the 80/20 principle? Let me give some history of where this concept originated. The concept was introduced in 1897 by an Italian economist named Vilfredo Pareto. He observed that most income and wealth came from the minority of the people in his samples. He found that twenty percent of the people owned eighty percent of the land. From that day forward he continued his quest to see if his discovery stood true to other areas of our lives.

I decided to do my own research on books discussing the 80/20 principle, in order to get a clearer understanding of this concept. I just completed a great read by Richard Koch called the 80/20 principle. He goes in depth on how we can implement the rule into all facets of our life to produce success. Richard explains how using the principle can increase success in your company, career, relationships and overall health.

Here are a few statistics of the 80/20 principle:

-Eighty percent of what you achieve in your job comes from 20 percent of your time spent.

The key is to concentrate on the most important twenty percent that will create the most success in your life. This will take you sitting down and writing down what actions, behaviors and rituals create the results you ultimately want. Here are four rules for understanding how decision making connects with the 80/20 rule.

The premise of the book is to find where twenty percent of your efforts gives eighty percent of your return. This premise is the true essence of the 80/20 principle, to do a few things well and specialize in that particular area.

Confucius once said, “the man that chases two rabbits catches none”. We are so consumed with trying to do everything, instead of mastering a few things. Discipline yourself to improving twenty percent of the most important areas in your relationships, company services, Job performance and health. That is the only way you will see exponential growth and lasting success in all areas of life.

Quote of the Day: “Success demands singleness of purpose.”-Gary Keller

To help change the world one day at a time, through transformational and innovative services!